Skip to end of banner Go to start of banner

Breakout rooms:  A tool available to the host of a Zoom meeting that allows for the assignment of students into different groups.  The groups can then "breakout" into separate "rooms" and have sessions of their own.  The host can join any of the sessions and switch between any of the sessions at any time.  The sessions can be vacated, and students can come back to the main meeting. The main meeting is akin to a plenary session and the breakout rooms are the different sub-sessions.

This tool/feature is turned on and available by default on all Whitman Zoom accounts, if you do not see the Breakout Rooms tool in the meeting controls toolbar, nor the option to create pre-assigned breakout rooms when scheduling in the web portal, check your individual account settings. Please make sure that the Zoom client you and your attendees are using is the latest version.  To check for Zoom updates, see this article.

There are two methods of creating breakout rooms (both are documented in this article):

There are some options to help you manage breakout rooms.  These are accessed via the Options sub menu on the bottom of the Breakout Rooms list window (This window will appear during the creation and assignment of your breakout rooms)

Method 1: During a meeting (recommended)

The simplest way to create breakout rooms is to use the Breakout Rooms tool once a meeting has started.  This has the advantage of creating and assigning breakout rooms based on the people that are actually in attendance, regardless of how they accessed the meeting (i.e. they could have entered with a non-Whitman email address).  Here is how to do it:

Pre-planning breakout rooms can be a time saver, if done properly, - and the pre-assignments can be saved as a CSV file to use in later class sessions. Pre-planning break out rooms is accomplished during the scheduling phase of a meeting via the Zoom scheduling interface, and/or by uploading a spreadsheet (saved in CSV format only) of your room assignments.  Both methods rely on assigning participants by the email address you think they will use when joining a meeting.  Since some participants may join a Zoom meeting by clicking on a zoom invitation link without ever having signed into their Whitman zoom account, selecting Require authentication to join, with the sub-option of Sign in with Whitman SSO (whitman.zoom.us) forces all attendees to sign-in with their Whitman e-mail address before they join.  This then allows Zoom to assign all the participants who join to the breakout room you assigned by using the same Whitman e-mail address you used in planning the breakout rooms.  Note, selecting Sign in with Whitman SSO (whitman.zoom.us) also prevents any participants that do not have a whitman.edu email address from joining a class session.  If you need an outside member to join the class and you are using breakout rooms, then then choose the Sign in with any Zoom account sub-option.

in the meeting control toolbar during a meeting.

Clicking on the Breakout Rooms icon during a meeting will open a window that shows a list of the breakout rooms as you planned (if you did so), with the room assignments. You can edit the room assignments before opening the rooms by clicking on particular names and moving them to a different room.  When you are ready to have the groups break away, simply click on the Open all Breakout Rooms button.  The window title will change to Breakout Room - In progress. If you did not pre-plan breakout rooms, you will follow the steps under Method 1 above.

The Breakout Rooms - In Progress window will look like this (note the Broadcast a message to all and Join links): 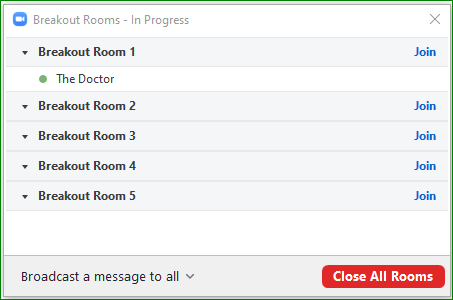 Some potential failures with breakout rooms: