Skip to end of banner Go to start of banner

The history palette extends the power of the Edit > Undo Command common to most applications. This tutorial covers stepping backwards in history, remembering steps, snapshot, new document, and delete buttons, and the history brush.

Edit > Undo continues to work in Photoshop as a basic undo command that undoes the last action taken. In contrast to the basic Edit > Undo function, the history palette possesses the capacity to undo more than one action at a time without reverting to the document's last saved state; by saving each change to an image, the history palette allows you to examine multiple revisions of your work (called "states") and revert to any of these image states whenever desired.

It also allows you to save your project at different states in either a temporary (Snapshot) or long-term (New Document) mode without affecting subsequent states and to use a selected image state as a source for the History Brush tool.

To access the history palette, go to Window > History.

How do you step backwards through your steps?

Each alteration made to an image is listed as a new image "state" at the bottom of the history palette list; thus, the oldest state is at the top of the list, while the most recent state is at the bottom of the list. You may observe these states at random by clicking on and highlighting the desired state; observing a previous state does not obliterate the history palette's listing of the later states, but choosing a previous state and editing that image will eliminate all the history states that once came after it. You may also move through the states using two keyboard shortcuts.

Command-Option-Z moves backward in time through the history states

Command-Shift-Z moves forward in time through the history states

How many steps are remembered? 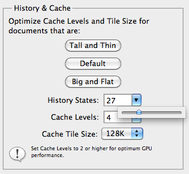 Is History remembered after you close a document?

History is not remembered after you close a document. When you reopen a document, the first state remembered by the history palette is the document's last saved image.

Clicking any of these buttons will perform the task on the highlighted (blue) history state that you are currently viewing. Be sure to select the state where the change that you would like to eliminate occurred when using the delete feature, for in the event of a mistake, the only way to recover the deleted states is to use the undo button immediately after the fact. 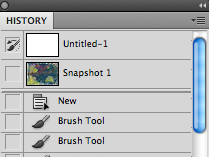 This feature allows you to select a history state from the list in the window and to take a temporary "snapshot" of this state. A reduced image of the image state will appear at the top of the history palette window, below the original document. This snapshot will remain in the history palette until you exit the document and will not reappear in subsequent work sessions. The benefit of this is that you can compare the subsequent changes to the snapshot state easily. Additionally, a snapshot can be used as the source for the history brush.

This option acts much like the snapshot option except for that the selected image state becomes a new Photoshop document (appearing as a new tab in the project window) which can be saved and returned to in later work sessions.

Any history state, including a snapshot, can serve as the source for the history brush (located on the main toolbar on the left side of the project window). To select a source, simply click in the box to the left of the state or snapshot you want the brush to use. A history brush icon will appear in the box, indicating that it is selected. This will allow you to paint over an image, restoring those painted areas to a previous image state.

Can't find what you're looking for? Email us at itknowledgebase@whitman.edu and let us know!